The Future Space Colonies of the Human Race

Over the past few years, the search for extraterrestrial life has unearthed a host of newly discovered planets in the habitable zone. Most of these are so far away that we are unlikely to get even a glimpse of them in our lifetime, but, assuming society continues to advance, our descendants will.

If we’re lucky, on some of those planets they may discover true extraterrestrial life. If – probably more likely – they don’t, they may instead use them as the bases for some of humanity’s first colonies beyond the solar system. Here we look at some of the planets that could host the human race’s future homes.

Discovered in 2016 by astronomers from the European Southern Observatory, and the closest potentially habitable exoplanet to Earth, Proxima Centauri b is thought to be a rocky world slightly larger than Earth. It is also suspected to have its own oceans and a thin atmosphere, although there are some potential issues that could impact on its habitability.

The planet is far closer to its star than we are our own Sun, prompting concerns that it could be tidally locked. If this were the case, any future settlers would be forced to make their homes on the border region between the planet’s always-lit blazing hot size and the forever-in-darkness cold side, known as the terminator line. Here liquid water could be abundant, although residents would still need to take precautions: it’s possible that the planet is regularly subjected to ultraviolet and X-ray flares, which might require habitats to have shielding to protect their residents. 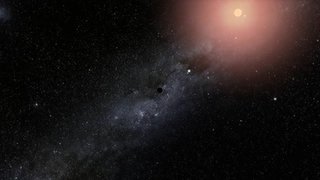 If Proxima Centauri b is a bust, or the population of humans gets too large for one exoplanet alone, the next port of call might be Wolf 1061c. Another discovery by the European Southern Observatory, this time in 2015, the planet is quite different to Earth. For one thing, it’s quite a bit larger than our planet, and is categorised as a super-Earth. For another, it orbits a red dwarf star that is far smaller and cooler than our own Sun. This means that Wolf 1061c orbits far closer to its star than Earth does to the Sun, which significantly raises the chances of it also being tidally locked.

However, it could have a far thicker atmosphere than Proxima Centauri b, which may allow enough heat to be transferred to the side forever facing away from its star to be liveable, albeit in colonies likely entirely lit by artificial means. It is, however, thought to be rocky, making it a potential source of metals and minerals that could be valuable resources for potential settlers.

Yet another planet that is thought to be tidally locked, any settlers of Gliese 667 Cc would need to live on the terminator line between the planet’s dark and light sides. Life here, however, might be very pleasant, although a bit chilly, with a surface temperature of 0°C, making liquid water a serious possibility.

What would make this planet special to live on would be the majestic sky. Sadly, there are unlikely to be what we think of as sunsets, but who needs them anyway when three suns hang in the sky? While Gliese 667 Cc, which was discovered in 2011 by the European Southern Observatory, orbits the red dwarf star Gliese 667, that star is part of a trinary star system, the smallest of a group of three stars. As a result, in addition to a conventional – albeit slightly redder – looking sun, two smaller red suns would constantly be looking over the planets inhabitants.

If tidally locked planets prove to be untenable as humanity’s out-of-the-solar system outposts, the TRAPPIST-1 solar system may well become the home of humanity’s first major exoplanet colony. The closest system we’ve found to our own solar system, TRAPPIST-1 is orbited by seven planets, three of which are in the habitable zone and could have abundant liquid water on their surfaces.

Discovered by NASA earlier this year, the system’s three potentially habitable planets, TRAPPIST-1e, 1f and 1g could form the basis for a second home for humanity, perhaps mirroring a multi-planet colonisation of our own solar system – assuming, of course, that we don’t find intelligent life there. Plus, TRAPPIST-1 is a fairly quiet red dwarf star, meaning it doesn’t send out many solar flares and thus making the chances of habitability higher.

Discovered in 2015 as part of NASA’s Kepler mission, Kepler-186f is the first Earth-sized exoplanet to be found in the habitable zone. It’s only 10% larger and has a year that while not as long as our own feels far closer than nearer exoplanets.

However, while future humans might find the planet to be a home away from home, there are some serious differences from Earth. First and foremost, it would be dimmer as a result of Kepler-186 being another red dwarf: at the height of the day on Kepler-186f the star’s brightness would be equivalent to our sun an hour before sunset: a planet forever bathed in twilight.

This also means that the star’s light spectrum leans far more to the infrared. Scientists have hypothesised that this would result in plants that had evolved to photosynthesise quite differently to their Earth counterparts, giving rise to greenery that would be far redder in hue.

Prior to Kepler-186f’s discovery, Kepler-62f was considered the closest habitable zone exoplanet to Earth, at 40% of its size. Found back in 2013 by NASA, the planet is one of five orbiting its stars, but is the only one to be considered in the habitable zone. Similar to other potentially habitable exoplanets, the planet would have dim light compared to Earth, but could well have oceans, and even a moon. What’s more, Kepler-62f orbits an orange dwarf, which means it is subjected to far lower levels of radiation than other planets on this list.

However, at 1,200 light years away, if humanity is to make a home there, it will be far, far into the future, unless radical new ways to cross the stars are someday invented.